blessedmama
Hello, I became vegetarian in 1990 and vegan in 1996. I am living a blessed vegan life with my family. I am a Christian wife and mother who homeschools her three vegan blessings, making me a Blessed Mama.

I am happy to share my recipes with you. But, please keep in mind that many of these took several tries before I got them just right. I never post anything that I'm embarrassed of or that cannot be achieved by someone else by simply following my recipe. With that said, feel free to use them, and if you reprint my recipe, just remember to give credit back to me. I would greatly appreciate it. Thank you!

Years ago, there was a Sacramento restaurant that G and I went to for breakfast. SR was just a baby and toddler at the time, so she just nibbled off our plates. But, I loved to order their potato skillet. It was a big plate of home fries covered with veggies, ham, cheese and a fried egg on top. By the time I had them leave off the ham, cheese and fried egg, I was left with home fries and veggies. I still loved it, though, because we could actually go out to breakfast on a Saturday morning, a rare treat for a vegan! But, then my frugal mind started adding up the money that I was still paying for the invisible ham, cheese and fried egg, and I began to wonder if I could duplicate this at home, but even more awesome than theirs. And what do you think I did next? You got it - experiment in the kitchen! Yay for my guinea pig family! So, the trick was to get that secret, elusive home fry flavor down: you know what I'm talking about - crispy potato square on the outside with a fluffy center. Just frying potatoes wasn't cutting it. I had to haul out my Big Daddy deep fryer. I deep fry about once or twice a year, so I'm not ashamed, I tell ya! Anyways, the potatoes were perfect, and by adding veggie hot dogs, vegan cheese and just the right veggies, it did the trick. I now have my scrumptious version of the Breakfast Potato Skillet! (Imagine that name echoing a few times.) Mine ends up being baked, and I don't think the restaurant did that; hence their "skillet" name, but I've kept that moniker for some good memories. That restaurant is now out of business, but we're still in the business of chowing down in the Blessed Vegan Life home. Come share in our food! 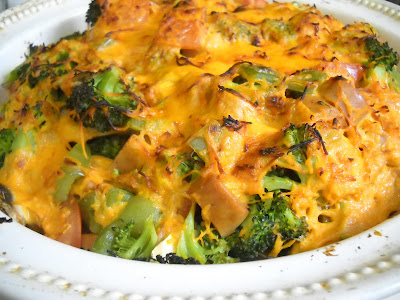 Breakfast Potato Skillet out of the oven 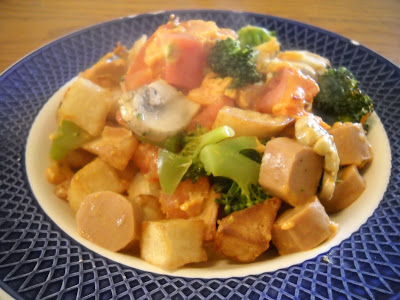 A steaming serving of this delight 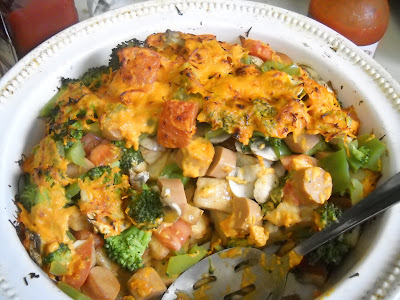 The serving bowl after being attacked by hungry vegans!

Prepare the deep fryer. Gently put in three of the potatoes, diced, in the deep fryer. Cook for 12 to 14 minutes, until golden. Drain on paper towels and salt according to your taste. Repeat two more times with the remaining potatoes. I will do this step often the night before so as to save time in the morning. Put potatoes in a large baking dish. Preheat oven to 375 degrees. Meanwhile, put the broccoli, bell pepper and mushrooms in a medium pot with about an inch of water and a steamer basket. Steam for about ten minutes, just until the broccoli is fork-tender. You do not want to overcook them. When ready, put them in a medium bowl, along with the tomatoes. While the veggies are steaming, prepare the hot dogs according to package directions - I bring water to a boil, turn the heat off, add the hot dogs and let sit for two minutes. Slice the hot dogs into 1/2" rounds. Add the hot dogs and half of the cheese to the bowl with the veggies. Add salt and pepper to taste, and stir the whole thing very well. Pour on top of the potatoes in the baking dish, and sprinkle the rest of the cheese all over the top. Cover with a lid and bake for 30 minutes. Remove lid and turn on the top broiler, and broil for 3 to five minutes to melt the cheese. Serve with hot sauce and/or ketchup. Mm-mm goo-ood! Feeds five hungry vegans with leftovers for lunch...maybe.
Posted by blessedmama at 3:39 PM